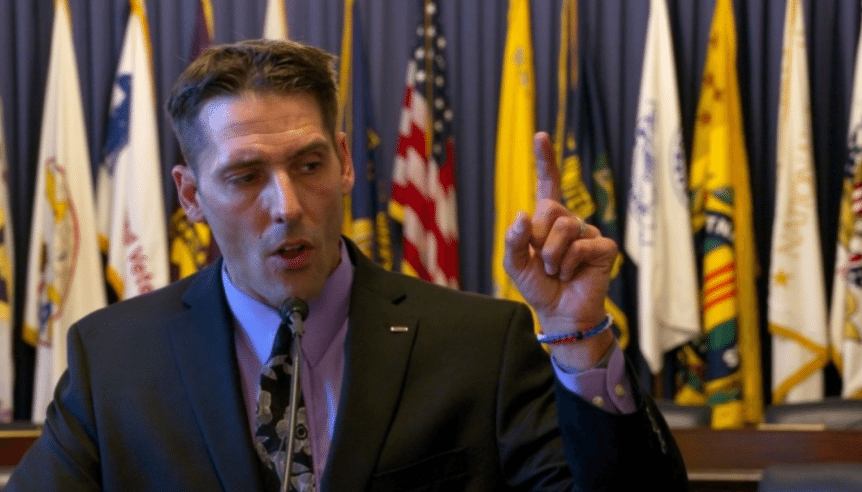 A Melbourne, Florida native, Joshus Frey is a combat veteran that has been awarded two Purple Hearts for his service. He spoke in Washington D.C. at an American Legion news conference last week telling his story about how medical marijuana has not only saved his life but provided him the ability to have a beautiful family. Veterans have lost their patience with the closed minded nature of the federal government towards cannabis and do not understand why many of them are still breaking the law to access marijuana therapy. Please click here to find out more about Florida’s medical marijuana program.

There is no doubt that more research is necessary to have a clear understanding of the benefits and potential threats of medical cannabis. The testimonies from these military veterans about how marijuana has saved their lives are compelling and should be all the U.S. government needs to push faster for more of that definitive research.

This Marine Corps veteran is a two-time Purple Heart awardee. He is among the former warfighters, led by the American Legion, who are on the frontlines of the fight for a sensible, federal medical marijuana policy.

They are pushing a reluctant Uncle Sam to catch up with overwhelming public opinion that favors allowing cannabis for medical use. We covered the Legion’s Capitol Hill press conference on Thursday with Frey, other veterans and a bipartisan group from Congress. Veterans, among the most respected citizens, are a potent force in the effort to move the federal government from a backward, anti-marijuana stance that resembles the 1936 melodramatic film propaganda of “Reefer Madness” more than today’s reality of widespread medical cannabis use.

Now, we hear the stories of two veterans who use medical marijuana and one who didn’t, but whose mother believes would be alive if he did. In powerful, emotional statements at the news conference, they all complained about the dangers of the drug cocktails prescribed by doctors who are prohibited from even discussing the marijuana that has proven far more beneficial for the two vets. Their stories differ starkly from a presidential commission on drug addiction report this month that said “there is a lack of sophisticated outcome data on dose, potency, and abuse potential for marijuana.”

Let’s start with Frey, a Melbourne, Fla., combat veteran of the Third Battalion, First Marine Regiment. “Medical marijuana saved me,” he told the Federal Insider. “I feel like I did before the war (in Iraq) mentally and … know this could help not just the veterans struggling, but it could help anyone struggling with addiction and PTSD (post traumatic stress disorder). It’s time we all stand as one voice and truly move forward with real hard-lined research and move forward with real compassionate care.”

Frey was wounded twice in 2004, once in November by a rocket-propelled grenade. Less than a month later, shortly before Christmas, he was shot in the right shoulder, shattering it and detaching his right bicep. He spent two years at the Naval Medical Center San Diego, also known as Balboa Hospital, had six blood transfusions and 22 operations.

He resents the Department of Veterans Affairs (VA) saying “you are doing something bad.” “We need to stop the madness. We need to get this stuff on the books. … It could help a lot of vets.”

Boone Cutler is an Army veteran who spent two years in Walter Reed Army Medical Center recovering from combat injuries suffered in Baghdad. Host of the Tipping Point show on KNEWS, 107.3 FM in Reno, Nev., he has been diagnosed with early-onset Parkinson’s disease, related to his wartime blast injury. He authored the Spartan Pledge, the veterans’ commitment against suicide, and is a national spokesman for the Warfighter Rights Movement on PTSD issues.

During his two years at Walter Reed, “I was given just about every chemical cocktail you can imagine. When people look at that cocktail they want to know two things. One, why am I still alive and two, why isn’t somebody in prison, because it was that dangerous.”

At a low point, he “grabbed my gun and put it to my head,” blaming the prescription drugs for losing “my self-preservation instinct.”

He turned to marijuana to help him sleep.

“My story is not one of Cheech and Chong,” he said, sunglasses perched just above his eyes. “It wasn’t a good time when I started using cannabis. It was simply a way to survive.”

Janos “Johnny” Lutz isn’t here to tell his story, so his mother did. She told a sad tale of depression and prescription drug complicit suicide. He saw combat in Iraq and Afghanistan, where 14 of his colleagues died during Operation Khanjar in Helmand Province in 2009.

“It is our hope that the story of my son, who was lost because of prescribed pharmaceuticals will open your hearts and minds to research,” Janine Lutz said before an emotional pause, “to research cannabis, the most safe and effective treatment for our veterans today.” She started the LCpl Janos V Lutz Live to Tell Foundation in Davie, Fla., in support of military and first responders.

Her son was diagnosed with severe PTSD and brain injury. The two dozen drugs he was prescribed included Klonopin, which he took in June 2010. “Within a week, Johnny attempted suicide,” said Lutz. Her son was saved, and “Do not give Mr. Lutz Klonopin” was noted on his hospital chart. But the veteran was not told that, and he continued to believe that “he wanted to take his own life by his own free will,” his mother said, “not knowing that it was the medication that was messing with his mind.” Three months later he was given the drug again, only to be followed by another unsuccessful suicide attempt.

This scenario repeated in 2012, but this time her son was successful in his suicide by overdosing on the drugs doctors prescribed.

“I think my son would be here today,” Lutz said, if medical marijuana had been available.

But it’s not for veterans at VA facilities. Almost two-thirds of the general population, however, live in the 29 states and the District where doctors can recommend it. At the VA, medical professionals are not allowed to even discuss marijuana therapy.

Many veterans, some using medical cannabis from other sources, have asked VA doctors such as Katherine Mitchell in Phoenix about it. “I was not officially allowed to discuss the subject,” she said.

“Whether the establishment wants to recognize it or not,” Mitchell added, “because marijuana use has moved into the mainstream, health-care providers have an ethical obligation to help our patients understand the potential positive and negative impacts marijuana could have on their health.”